My older brother and I didn’t have a lot in common growing up. One thing we did have in common was claiming the cereal prize. My mother got so tired of these internal wars that she initiated who ever could see the prize after they poured there cereal could claim the plastic bounty. As many of you know they pack these in the bottom of the cereal bag so it could take a few days before the hint of the plastic corner could see daylight.

During one summer I was in an awful slump claiming the prizes that I got a great idea. I opened the new box of Frutti Pebbles from the bottom and immediately secured the prize.  Triumphant at last! It was a Fred Flintstone ice cube mold. I poured some lemonade into the mold and 3 hours later I had a lemonade ice cube that I proudly slurped on in front of my brother.

These kind of acts were typically the case unless one of these precious gems was in the cereal box. 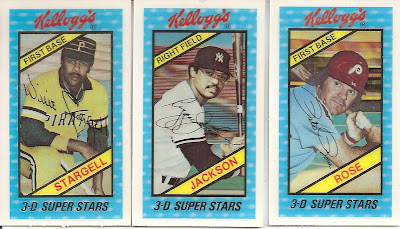 One thing that my brother and I could agree on, was that I get the 3D baseball cards as he could care less about baseball.

Last week I ordered a set of 1980 Kellogg’s 3D cards from ebay and they arrived yesterday and they look great!  I didn't have very many of these, but the few I did have went into my collection and got looked at just as much as the other cards. I just remember they looked really cool. So when I saw this auction I bid immediately.

Looking over the set I pulled my 3 favorite players from that era.

Willie Stargell, 1st Baseman for the Pittsburgh Pirates. At that age I could see that Willie was a great leader and everybody listened when Willie had something to say. I always wished I could get a "Stargell Star".

Reggie Jackson, Outfielder for the New York Yankees. Reggie was the premier superstar of the time. Reggie was dynamic and could change the game with one swing of the bat and often did.

Pete Rose, 1st Baseman for the Philadelphia Phillies. Pete rose was nicknamed Charlie Hustle. The guy would run to 1st base on a walk!  To this day when I think of hustle and giving 100%, I think of Pete Rose.

All 3 of these players were great in their own way and played on great teams that all had very unique dynamics.
Posted by ToppsGuy at 3:04 PM